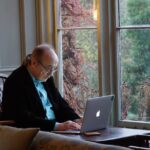 To enhance your cognitive wellbeing, try learning a new language

A research study authored by psychology professor Ellen Bialystok and colleagues from York University sought to determine whether language learning was effective at boosting cognitive health among older adults.

Results show that the language group exhibited similar levels of enhancement across various cognitive parameters, relative to the brain training group. This was a surprising conclusion – it suggested that learning a new language involves both working memory and executive function (two measures typically associated only with brain training). Thus, the process of learning a new language, even if you do not become sufficiently fluent in it, may be enough to keep your brain sharp in older adulthood.

Meltzer mentions that biological damage to the brain with old age is unavoidable, but a robust cognitive reserve is protective in maintaining cognitive functions for longer, despite damage. “In general, any engaging mental activity can help build cognitive reserve – learning a musical instrument, learning a language, anything creative,” states Meltzer.