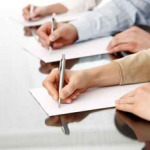 Would you pass? The Chinese exam that decides your future

Brook Larmer’s article in the Hamilton Spectator highlights the extensive measures taken by students and families in preparation for the gaokao, China’s national college entrance exam. The gaokao is written by over nine million students each year and remains the sole criterion considered by Chinese universities during the admissions process. This places an enormous amount of pressure on students who wish to pursue higher education. Students will dedicate years of their life to studying for the gaokao.

In rural China, Maotanchang High School, also known as a “cram school,” helps disadvantaged rural students train for the gaokao. The curriculum is rigorous to say the least, with days frequently lasting over 16 hours and no weekend breaks, apart from a three-hour break on Sundays. Visiting hours are limited and student rooms are purposely designed without power outlets to enforce the ban on cellphones and laptops. The surrounding town also caters to the priorities of the school, with a limited number of entertainment options available to students. Despite the lack of town activities, rent for homes in the area is comparable to that of downtown Beijing, with numerous families paying top dollar for a place close to the school. The additional financial burden of tuition, however, is dependent on how a student performed in high school. Lower high school marks equate to higher tuition rates, in an attempt to further motivate students to work towards the achievement of higher grades.

Those that can afford the option, sometimes choose to opt-out of this system entirely, and instead send their children to private international schools in China or abroad. However, for many, especially families in rural areas, this is not an option. The gaokao is the only chance for children to escape a life of manual labour and access opportunities that were not available to their parents.

While the purpose of the gaokao is to provide all students with an equal opportunity to pursue higher education, regardless of economic status, the reality is families with higher incomes can afford private tutors and extra help, thus providing their child with the extra resources they need to succeed. The aim of schools like Maotanchang is to even out this playing field by providing similar opportunities to rural families who cannot afford the same level of help as wealthier families.

However, while schools like Maotanchang are relatively successful, the question remains whether this kind of testing is worth the amount of stress it places on young students. The dangers of such pressure are clearly apparent with suicide rates rising as the date of the gaokao draws near. While the Chinese government has attempted to alleviate some of this pressure by encouraging universities to consider more than the gaokao results, expand the curriculum, and reduce student workloads, parents and students alike continue to go to great lengths for the gaokao exam.