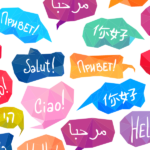 The world is full of roughly 6,500 languages, but most Americans are only taught one or two – why is that? We know that learning more than one language lowers the likelihood of developing dementia and improves creativity and attention skills, but American universities are reluctant to fund language studies. Amy Thompson explains why it’s vital to encourage the learning of foreign languages; mainly, knowing different languages can make us more tolerant.

There are two main ways in which multilingualism and the process of learning a new language improves tolerance. One is the notion of cultural competence, or the ability to interact and effectively communicate with individuals from cultures different from our own. American researchers Hanh Thi Nguyen and Guy Kellogg examined the social activities of language students and their understanding of stereotypes. They found that learning a new language not only involves knowing its form but also discovering new “ways of thinking and behaving”. Specific languages reveal specific cultural stereotypes, and we engage with these stereotypes in a unique way when we open ourselves to a new manner of communication.

The second tolerance building component of learning a foreign language is tolerance of ambiguity, which refers to an individual’s capacity for dealing with unfamiliar experiences. An individual with a high tolerance of ambiguity is able to rise up to the challenge of unfamiliar situations rather than shy away from them. This skill translates into language learning when one is faced with maintaining a conversation despite the appearance of unknown words.

Becoming multilingual may reduce social anxiety and increase social competence through improving cultural competence and tolerance of ambiguity. In a higher education setting where social life is formative, language studies can play a crucial role in improving the types of connections students create and carry for the rest of their lives.