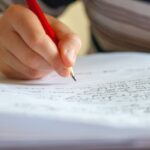 Handwriting may be better for creativity and memory

As the world becomes more reliant on technology, beginning as early as kindergarten and extending all the way to post-secondary school, it’s hard to escape the ubiquity of tech’s influence on one’s educational journey. This is even more pronounced as schools have shut down and learning has shifted online during the COVID-19 pandemic. Yet research still emphasizes the power that the traditional pen and paper method holds. This article shares findings from multiple research papers that further support the notion that we should continue to push for handwriting.

One of the research studies examined 12 adults (20-25 years old) and 12 youth (aged 12) who were instructed to type out or handwrite a series of 15 different Pictionary words. Brain scans reproduced earlier findings that brains are more active when handwriting, presumably due to greater sensory stimulation (compared to typewriting), including tactile, visual, and even aural modalities.

In another study, researchers examined 42 adults performing tasks in Arabic. One group was tasked with making a yes/no response to visual letters on a screen, another group was to find those letters on a keyboard, and a third group was to handwrite the letters on paper. The handwriting group learned more efficiently, presumably since using hands is more active and involves more sensory modalities.

Such benefits are not limited to adults. Another study, done on 5-year-old subjects divided into 3 experimental groups of printing, typing or tracing, revealed that those who handwrote exhibited high levels of brain activity in a region associated with reading, not found in the other groups.

Finally, handwriting may be associated with greater levels of creativity. A study done on grade 2 students found that they wrote more words in the same amount of time, if using a pen compared to keyboard typing. Students in higher grades (4-6) came up with a greater number of complete sentences, compared to those who used a keyboard. These apparent cognitive benefits of handwriting were not only limited to neurotypicals, as students with dyslexia also had increased levels of creativity.

The final takeaway of this article is to encourage students and children as young as 3 years old to use pen and paper to draw letters and words, and to pair these with spoken sounds too.