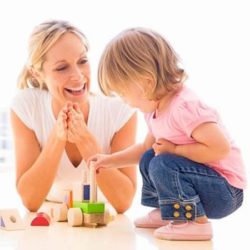 A study conducted in 1995 discovered that children from higher income families tend to hear about 30 million more words in their first three years of life in comparison to children from lower-income families. It was concluded that the significant word count difference affected their vocabulary, language development and reading comprehension. However, it was still unclear how this word gap might affect changes in the brain. Cognitive scientists from MIT decided to do further research into this matter.

Their study focused on children between the ages of 4 and 6, comparing fMRI brain scans and paying close attention to Broca’s area, which is a part of the brain involved in speech production and language processing. A Language Environment Analysis (LENA) was used to analyze the number of words spoken by or to the child, and the number of times conversational turns occurred. Researchers predicted that the more conversational turns that occurred between an adult and child, the more differences in brain physiology would be found.

Rather than word count being the most important factor in the development of vocabulary, language and reading comprehension, it is actually the conversations that take place between an adult and a child. Results also showed that children who were engaged in more conversation had a more active Broca’s area. Rachel Romeo, the lead author, stressed that, “The important thing is not just to talk to your child, but to talk with your child. It’s not just about dumping language into your child’s brain, but to actually carry on a conversation with them.”

MIT researchers involved with this investigation hope that the evidence from their findings will inspire parents to carry out more conversations with their children, not only between the ages of 4 to 6. In the future, interventions to support such interactions may include computer programs and electronic reminders to engage parents and children in conversations.