How cannabis can affect your sleep

There are many important side effects that come with using cannabis products, as Michael J. Brues reports in his article. 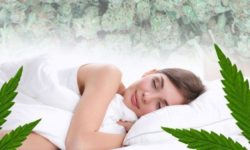 While cannabis is commonly used for recreational purposes, many also use it to address insomnia and other sleep problems. Cannabis has been known to have relaxing, sedative effects, and has been used as a sleeping aid for centuries. A large number of studies have demonstrated that cannabis indeed reduces the amount of time it takes an individual to fall asleep, for people both with and without sleeping difficulties.

Cannabis is composed of multiple natural chemicals that influence sleep, including cannabinoids and terpenes. Cannabinoids are chemicals that act on cannabinoid receptors in the body, while terpenes are aromatic molecules that create the smell and taste of natural plants, fruits and flowers. Tetrahydrocannabinol (THC) is a cannabinoid that produces a variety of effects including sedation, improvement of breathing, reduced REM sleep time and increased slow-wave sleep. With the effects that THC carries, it can serve as a possible solution to treating sleep disorders such as sleep apnea and PTSD.

Terpenes produce effects like sedation; relief of stress, anxiety and pain; and lowering of depressive symptoms. Some of the most common terpenes that have been identified to promote sleep include myrcene, caryophyllene, limonene, terpineol, and linalool.

In short, cannabis is composed of many chemicals that can help reduce the amount of time needed for an individual to fall asleep. That being said, there are many side effects that users should be aware of before taking the drug. Some of the known side effects include next-day grogginess, dry mouth, euphoria, increased appetite, and significantly impaired skills related to attention, memory and learning. Any potential users should discuss options with their health care provider to ensure that cannabis is the best choice for you.